Empire Magnetics has been named one of the top 10 companies that are at the forefront of providing Cryogenic solutions and transforming businesses.

Founded in 1987, Empire Magnetics spun out of Compumotor, a pioneer in step motor systems and controls. Keeping customer satisfaction upfront requires the company to build its motor products with the highest quality materials. This helped them stay at the forefront in delivering sustainable motors that can be customised according to clients’ varying needs.

Empire Magnetics’ prominent position in the industry is the result of its VP of Engineering, George Cinti, who have the company edge with his prowess in providing speciality motors to the NASA Apollo programs.

When it comes to cryogenic temperature applications, the operational efficiency of ordinary motors is far from optimum, or they are non-functional in many cases die to the contraction of metals. As the coefficient of thermal expansion varies from material to material, components within the motor – the magnet, coper wire, and insulations – contracts at different rates, resulting in a locked-up motor. The resultant stress can create cracks and ultimately break the metal parts that have been made brittle by super-cooling.

Empire magnetics is committed to mitigating these functional hardships and builds cryogenic motors with stainless steel, brass, or bronze that barely lose ductility at low temperatures. The company ensures that all metal components of the motor have comparable coefficients of thermal expansion to avoid cracks. As bearing grease hardens at extremely low temperatures, Empire Magnetics uses dry film lubrication or ceramic-type bearing that can operate without any lubrication to ensure that uninterrupted operation of its cryogenics motors.

While is necessary to have ferrous materials in the structural components to avoid cracking due to temperature-induced brittleness, performance can be enhanced by using them in a magnetic 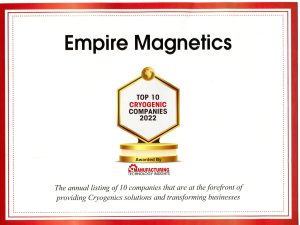 circuit. Due to significant difference in the CTE of magnetic metals and copper/insulation materials of windings, techniques to allow for these changes have been developed. It is also significant to be aware of the changes that occur in some magnets. Neodymium magnets appear to lose about 30 percent of their flux at low temperatures due to a change in the molecular spin so that the direction of the magnetic field is shifted about 30 degrees, resulting in reduced motor performance. The specific construction of the magnetic circuit is one of the key design features of a successful cryogenic motor – at which Empire Magnetics take a lead.

Such capabilities make Empire magnetics’ cryogenic motors a go-to solutions for a wide range of applications that include observatory equipment, deep space, bull semen storage, and scientific research, to name a few. The company collaborated with a university in Chile to design and develop a motor and a gear assembly for their moon rover. After having a holistic understanding of the client’s needs, Empire Magnetics developed a small and robust cryogenic motor and a gear assembly that it only served their operation needs but also withstood lunar temperatures that is below -100°C.

In another instance, Empire Magnetics was part of the Brilliant Eyes Program, where the company provided motors that would survive 25 G shock at 24 Kelvin to Corning OCA, who was the subcontractor for Boeing. “Our cryogenic motors are also powering the Subaru Telescope in Hawaii for several years,” add Halstead. Unlike its competitors, the company’s motors can be easily and quickly connected to various mechanical assembles.

By adhering close it its mission meet6ing clients’ highly demanding operation needs, the company continues to innovate and bring new, future-proof solutions to the table. Moving ahead, they intent to put more emphasis on expanding heir footprints brushless motor space.

“Being agile at our core, we are now in discussion with several prominent players in the industry to share our technological expertise for addressing the futures’ needs,” concluded Halstead.