Imperial College London is a world-class university with a mission to benefit society through excellence in science, engineering, medicine and business.

The college has recently opened the Brahmal Vasudevan Multi-Terrain Aerial Robotics Arena. The first of its kind in Europe, the arena enables engineers to test the next generation of aerial robotics for urban environments and extreme conditions.

“The test arena will put the UK at the forefront of a billion-dollar aerial robotics industry, and the new test facilities at Imperial college will help the country to realise this ambition,” comments Dr Kovac, from the Department of Aeronautics.

Within the Arena, researchers can simulate different terrains – in the air, ocean and on land. The space also enables the engineers to create extreme conditions such as fire, smoke and heat to simulate how the next generation of drones will perform in harsh environments.

Our team were tasked to design and construct a massive 12m by 5m frame with the ability to move – under control – with a load of 200kg. High-speed digital cameras are mounted on the frame to capture and record the movement of the drones under test, so the structure and motion control components had to ensure minimal deflection, as small errors in movement would be magnified in operation.

The structure uses modular aluminium profiles from MiniTec with four MiniTec belt drive actuators mounted on the corners of the installation.

Running the rig is kept under precise control with an Arcus PMX-4EX-SA multi-axis controller. Encoder feed-back from each axis ensure that the axes are synchronised or “electronically coupled”.

Overall, the construction and design of the motion control components will deliver a higher capability than is currently required, but it was deemed practical to build in “future proofing” for requirements currently un-defined.

Key features of the Arcus PMX-4EX-SA 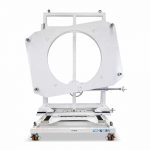